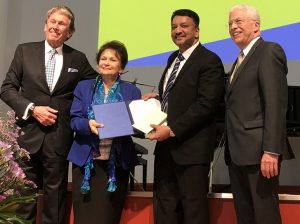 Prof SM Balaji has been honored with the highest scientific “ Prof David Precious Award ”. This was at the 12th World Cleft and Craniofacial Congress held in Leipzig, Germany. He is the first Indian to receive the honor in such a platform. The award comes with a citation, plaque and a cash award of US $1000.00. Prof Kenneth Salyer, world renowned Craniomaxillofacial surgeon, presented him with the award. He is the President of the International Cleft Lip and Palate Foundation. Congress President, Prof Alexander Hemprich was also present. Prof Marie Tolarova, Member, Board of Trustees, ICPF spoke a few words about Dr S M Balaji‘s achievement. This award is the highest award of the International Cleft Lip and Palate Foundation.

The International Cleft Lip and Palate foundation (http://www.icpfweb.org) is a thirty year old forum. It is multidisciplinary with members including all stakeholders involved in orofacial cleft rehabilitation. This is a non-profit organization. It promotes service to humanity and dissemination of scientific knowledge. The ICPF coordinates volunteer surgical missions in underdeveloped and developing countries. It sponsors surgeries in Vietnam, Cambodia, Tunisia and various other developing countries. They teach the local surgeons and cleft teams about cleft rehabilitation. The ICPF has its headquarters in Japan and has over 3000 members from over 60 nations across the world.

One of the founding Presidents of ICPF was Prof David S Precious. Prof David Precious resided, taught and served in Halifax, Canada. He was a notable Cleft surgeon who trained under Prof Delaire. Prof Delaire was the founding father of Craniomaxillofacial and Plastic Surgery. Dr. Precious established a Cleft Surgery unit in Canada. Prof Precious also continued research into Cleft treatment. He had many publications to his credit. In 2015, Prof David Precious passed away after a brief illness. The ICPF decided to instate a Scientific Award in his honor. It was in recognition of his immense scientific contributions to Orofacial Cleft rehabilitation. This is the highest Scientific Award of this noted International Organization.

Prof SM Balaji conducts research in Protein Guided Tissue Regeneration. He uses this for surgical cleft correction. The award is for these groundbreaking studies. Scientific merit was the basis of selection for this award. The selection panel consisted of world renowned cleft rehabilitation surgeons. Prof SM Balaji’s pioneering work removed the necessity of a second surgery and more bone grafts. This led to great improvement in the quality of life of the patients. It also avoided a lot of complications associated with synthetic substances.